It’s been one heck of a year since Chameleon first introduced us to foamy combat. Slowly but surely, interest grew, and not only did we have TEN combat flyers at the Omahawks labor day air show, but we also had other clubs and individuals try out the combat flyers!

So let’s take a look at some small tweaks we’ve made to the combat flyer over the year, some lessons learned, and some updated plans and 3D views. Since we’ve already covered the Mach One (aka Mark I – our lawyers messed up on that one, if we had lawyers or even a dispute to begin with) in previous articles, we’re just referencing some slight differences here.

Here’s the coverage from the 2010 Omahawks Labor Day Air Show:

I believe that is what they call ‘Potato Quality’. Nevertheless, some of the club members I used to fly with, along with a little bit of ‘RC Combat’ action at the beginning of the news coverage! 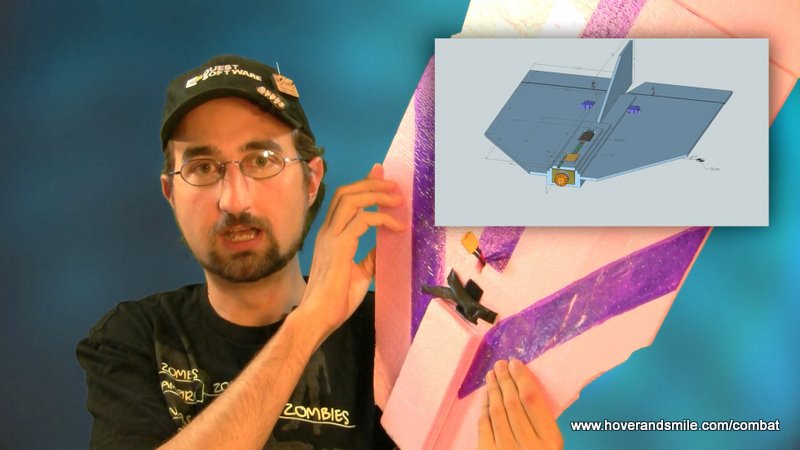 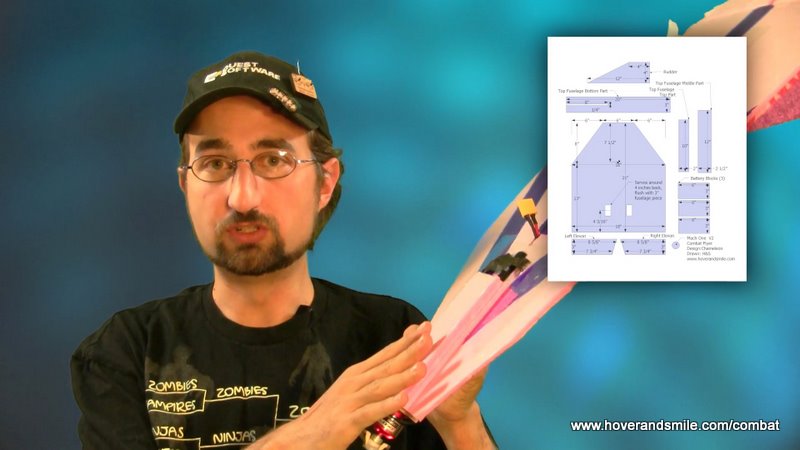 Our plans have been redrawn in Google Sketchup, and are available as a PDF to download here. 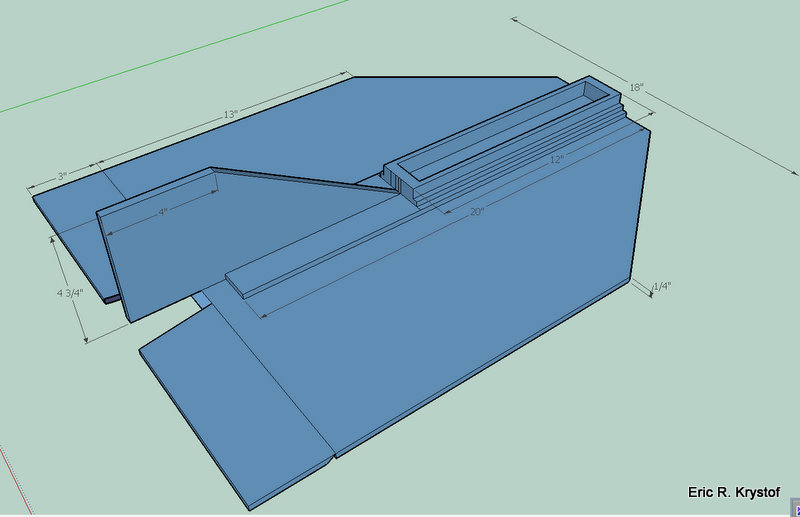 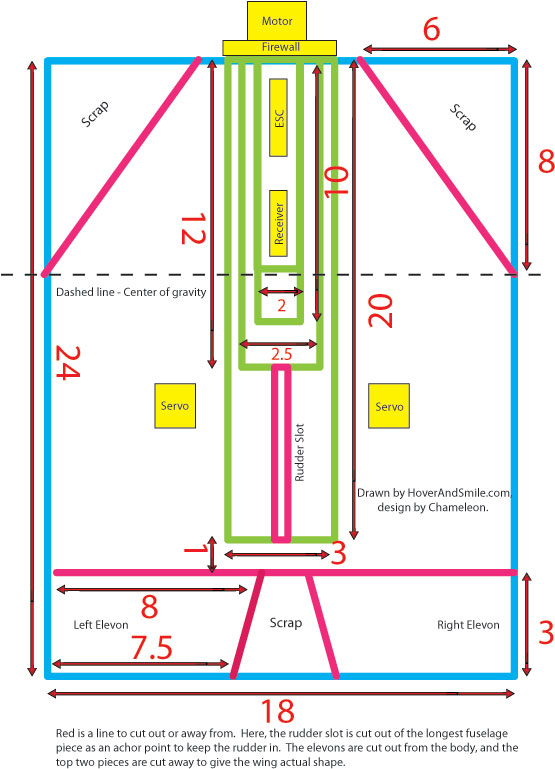 Some 3D Views are also available to help get a feel for what this looks like assembled. The biggest change to the plans besides cleaning them up – we’ve shortened the battery block to allow us to move the CG forward a slight tad.

Control Horns: Move em up and swap em out

Also, I’m trying Lexan plastic as not only a control horn, but also a small ‘receiver protection box’. I’m not terribly worried about most of the electronics in the combat flyer except for the receiver – it’s arguably worth more than the rest of the plane combined. Now you can use cheap receivers and transmitters, and that’s fine, but I love my Airtronics SD-10G. It has great advanced programming and customization that the geek/dork/nerd in me just drools over. (It doesn’t come with a drool shield, unfortunately) So, I built a small lexan cover to slide the receiver into – it has to be better than nothing if the errant prop goes KA-CHUNK against the receiver!

Get your Velcro Strap On

The Mach One is a squirrelly flyer compared to the classic trainer, even though it’s the first plane I learned to fly with. However, it’s meant to be squirrelly. This is FULL ON CONTACT COMBAT! Similar to Sparta, with almost the same amount of madness. So, keep the battery attached – make a secure Velcro strap that holds hugs the battery in place – don’t just depend on a single piece of Velcro attached to the underside of the plane. Speaking from experience on that one!

Yeah, it’s Pink. Prior to this, we’ve been using DOW Protection Board III – available locally at our Lowe’s shop. It’s blue, it’s around 1/4 inch thick, and it’s great for cheap foam planes, especially for COMBAT! However, if you’ve worked with it, you’ll notice a wave to the foam, and it’s annoying.

I decided to try something from a Lowe’s competitor of sorts – Owens Corning Pink Board from Home Depot. Still 1/4 inch thick and fanfolded, and while the sheet has a slight curve to the full width, it doesn’t have the waves that annoyed me so much in the past.

It’s a tiny bit more brittle than the blue fan fold from a simple bend test, and it may add 10-20 grams more weight to your flyer, but I love working with it in comparison, so while I’ll still use both, I do prefer… the girlie colored stuff. Thankfully, with some paint and tape, you can de-pink it a bit.

At the end of the day, I like the blue fan fold the best. Waves or not, the pink is a tad heavier and too brittle for combat. Live and learn.

After some slight experimentation with props and motors, I’ve found my personal preference to be the following:

Available from Heads Up RC, this motor has worked great for our combat flyer. Editor’s Note: Heads Up RC closed it’s doors mid 2019.

You can certainly use 7×3.5 or 9×5 props with the EMAX motor, but I personally prefer the 8×4 prop. It handles great and gives me the speed I need to get out of some of those hairy combat situations… or into them! Now, the CF2812 is rated as a maximum prop size of 7”, but I’ve had no problems with the 8×4 on this motor. 9×5 – you’re pushing it, and definitely avoid wide open throttle.

Get some cheap ESCs for your combat flyer – I’ve found some nice programmable ones for my various foamies at hobbypartz.com

While a 2S 7.4 V Li-Po battery works with the above motor – I like the power behind a 3S Battery, and I prefer almost the middle of the 1000-1800 mAH power range – that being a 1300 mAH 3S 11.1 Volt Li-Po. Balances the plane well, I get the power I need, and the flight times are decent. With a 1300 mAH battery, I can float gently around at half throttle for almost 15 minutes. HOWEVER, when in COMBAT! mode, I cut that down to around 5, as you’re really working the motor and servos. Good stuff!

We generally did use 9G servos, but we tried some little 5 gram units and see how they performed… Well, they performed badly, to say the least. Of course we’re not looking for QUALITY items here – it’s friggin COMBAT after all. But, between quality and the torque from the combat maneuvers, we’ve had better luck with 9 gram servos, so stick with those!

Hopefully you’re not flying these alone… Playing COMBAT! with yourself could be considered lonely and disturbing. So get some friends, but make sure you can tell each other’s planes apart! Dress them up! Foam safe paint, decals, colored packing tape, big thick markers – do what you have to so that you keep them not only separated, but you keep orientation of your craft as well – top from bottom and direction.

Of course, if you add too much tape or paint, you’ll strengthen your flyer up some, surely, but you’ll also add weight. Keep your balance in mind.

We’ve had numerous bits of correspondence over the year related to our combat flyers, which has been really great to read and share with our friends. Here now are two great examples of others using the delta wing Combat flyer:

Pantseatflyer built a single blog post on his experience with our Mach One combat flyer, and hopefully we’ll see an update as to how he’s taken out a friend or two, or perhaps the evil squirrel that ran across the field. Pantseatflyer’s Blog

They tried some crepe streamers cut in half to make some of the 1v1 combat jaunts a little easier, about 6 feet of string attached to 6 feet of streamer. They’re even considering trying 12 feet, as the six didn’t make much of a difference to the flight… I can just imagine some video of a prop eating up or getting wrapped up in a streamer… Sounds spectacular!

Between the huge MACH ONE BATTLESTAR GALACTICA CRUISER OF FOAM DEATH(my personal nickname for it) and the dual brushless Mach One setup, they’ve really raised the combat bar!

Check them out at http://www.chinovalleymodelaviators.org/

That wraps up our Combat: Reloaded segment. A refresher to some changes and tweaks made, some freshly drawn plans, some ideas on power systems and coloring schemes, and even how others have taken the Mach One idea and run with it. Clearly, Chameleon’s design, which evolved over many years, is a hit when it comes to fast paced foam combat action.

Note: HoverAndSmile.com is no more.  The content has been migrated into krystof.io.