I sing the body aquatic


If necessity is the mother of invention, vacations are the illegitimate father of hobbies. Back in December of 2014 I had saved up enough vacation to take half of the month off. What to do? Clean? Organize? Sure, sure… But what about all the days before the last vacation day?

I looked over at the long end of my corner desk. Not much there. A dumping ground. A little voice in my head said, ‘You need to fill that space with something to obsess over.’ Yes, little voice, whatever you say. I know… a small fish tank! It was really that simple, it just popped in my head. Nothing large, maybe a 5 gallon. Just something to turn my head over and look at once in a while, get lost in watching nature, take my mind off things…

I’ve never had my own real tank before. Pops had a Discus tank, but that had been gone for years, a sad story of a leak and heartbreak and it was now just a memory by this point. I figured I’d give it a shot myself. It also met my hobby requirements:

Get your hobby on

Knowing nothing about fishkeeping at this point, I drive down to a local Petco and talk with one of the employees in the fish department. It turned out she was a rare find, actually knowing about fishkeeping and had some herself. I’ve heard later horror stories on both sides of the customer/employee pet sales fence, so I look back at my experience fondly.

She explained the basics of tank cycling to a point, but that’s another post for another time. Nevertheless, with the three fish and regular water changes and API testing kit, I could monitor the cycling of my tank and these three small five dollar fish would be okay. Things were in my favor – I wasn’t overloading the tank and taking it relatively slow.

A simple yet nicely colored freshwater fish. I just don’t think I have the patience unless I could afford a large tank to make changes in parameters easier to handle.

I’ve been slightly dreading this part since I started the post. A picture of that first tank. gulp 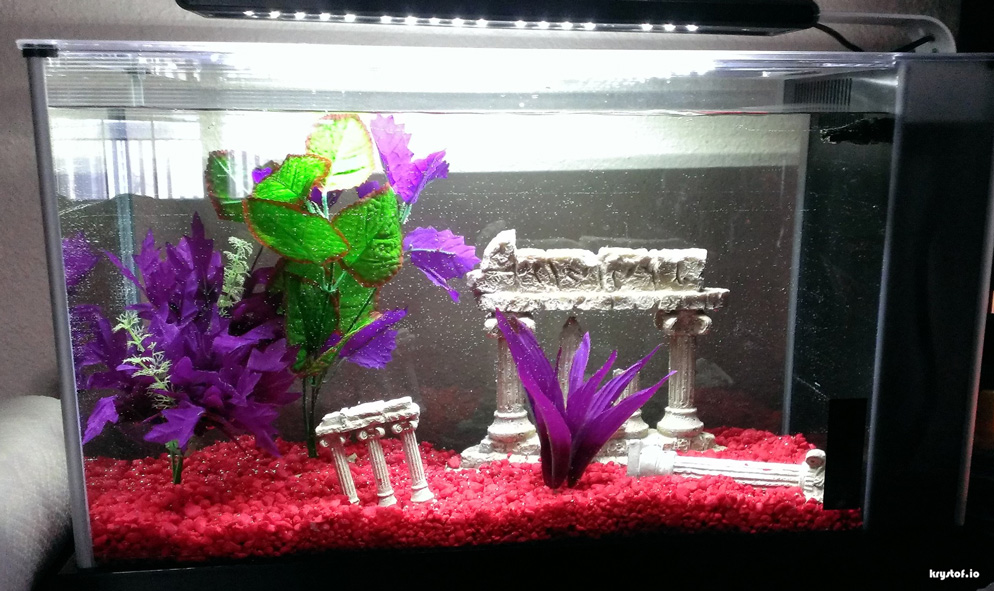 There really is an evolution in any hobby you pick up, and hopefully it’s for the better. I look back at that first tank, and I just think gaudy. I didn’t know anything about the underwater plants available to me, general aquascaping ideas, or different substrates (soil/gravel/rock) you could use. I just picked out colors and fake plants. I learned after that first tank – I don’t like fake stuff in my tank. I don’t need it to look ‘natural’ per se, I occasinally do themes, but I definitey like real plants. Real fish, too, but that’s a given. To each his or her own, though, and some like that style. I had to try it to learn how much I did not

My first two tanks, a Fluval Spec 5 and Fluval Spec 2 gallon, were extremely fake in regard to aesthetics. In fact, the 2 gallon spec, where I discovered red cherry shrimp and blazing fast snail action, is time-lapsed in the video below:

The music behind the video fits well, and snails sure do look fast if you cut out every fourth frame or so. I loved those little Spec tanks, I still use them now and then to this day for temporary housing. One thing I’d recommend though – if you see in the video the large white blob on the back of the tank – that’s putty I put there on purpose. There’s a safety inlet there to keep water running across the motor if you water level drops down too far. Great for that reason, bad for shrimp babies. Plug it up if you have anything that could get trapped in there. (Or use foam, I went a more fixed route). Of course, this means you’ll have to keep an eye on the water level up top.

Since then? Many, many tanks. Pops back in the hobby. CO2 injection. Fertilizers. Different species of shrimps. Hatching live food. Getting a table at a local swap with pops. Pops, C, and myself catching the flu at said fish swap. Aquascaping (or attempts, you could say). While I’ve toned down aquatics to a more long term manageable level, I did discover what my tastes are in fishkeeping:

Speaking of day, that’s enough for this one.

How A Tardis Themed Arcade Build Began To Take Shape

Crystal Red Shrimp Aren’t As Difficult As You...